Two Golden Nika statues and two second places won at the prestigious reportage festival, for an article, photographs, film, and report, published in Kurir and broadcast on Kurir Television. 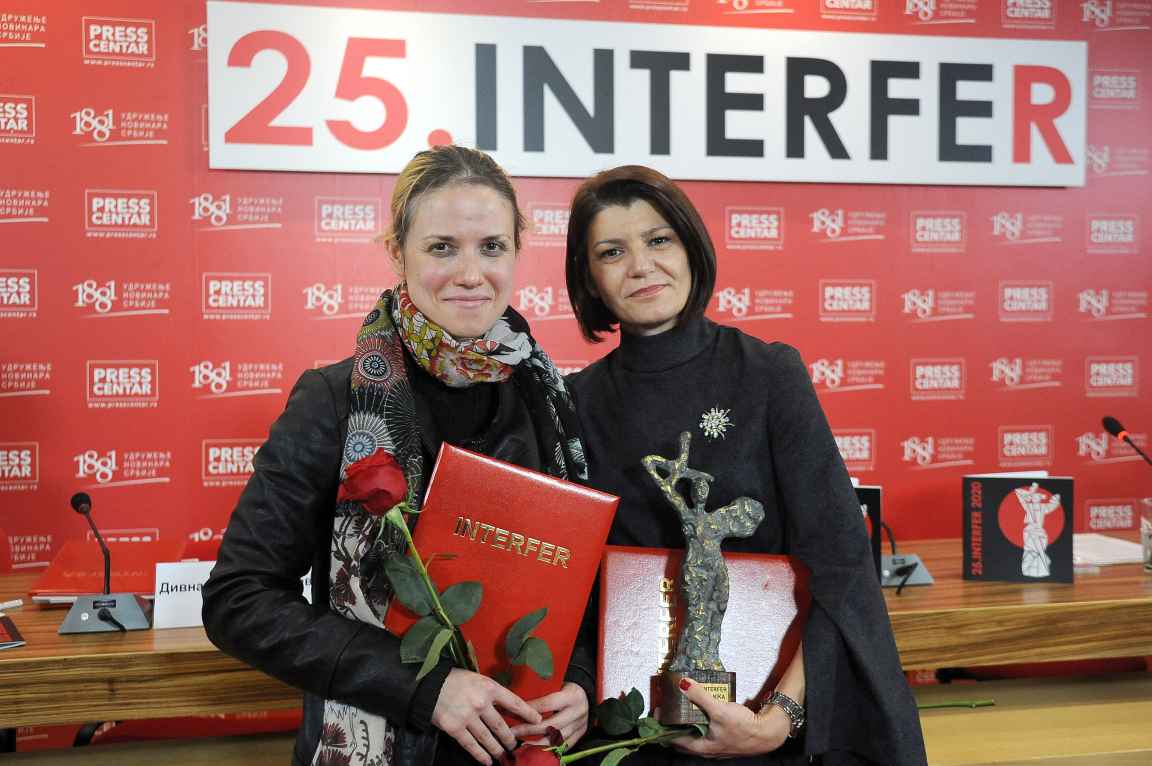 Kurir has won as many as four awards at Interfer – an unrivalled feat at this year’s prestigious reportage festival. Our media company is proud to receive two Golden Nika statues and two second places in the total of four categories.

‘An Entire Life in a Body Bag’, published in the Kurir daily and on the Kurir portal, is a haunting report from the red zone of the Niš Clinical Centre’s Clinic of Anaesthesiology and Intensive Therapy. ‘I know very well what the coronavirus is and how fast it kills. But regardless, entering the red zone is a horrific blow that you are not prepared for. The “encounter” with a body in a bag, all those unfortunate people in ventilator beds, hovering between life and death, and all those wonderful people in hazmat suits, some of whom are 20-year-old youngsters, facing the horror in both waking life and dreams, are overwhelming experiences. It’s a parallel world that puts a single thought in your mind – if the seven million of us were to enter there for no more than a minute, no one would ever again say that the coronavirus is a joke,’ Jelena S. Spasić said.

She added that she was honoured to receive the award, as well as grateful to all the wonderful doctors, nurses, and anaesthesiologists – the staff of the Clinic of Anaesthesiology and Intensive Therapy, led by Professor Radmilo Janković, MD. Professor Janković gave his permission to the Kurir team without so much as a question, and the team remains the only one to ever enter the red zone. ‘I will be truly happy if after seeing my report at least one doubting Thomas has changed his mind and realized that the coronavirus is to be taken seriously,’ Jelena added.

Ana Paunković was awarded for a series of dramatic photographs from the abovementioned red zone at the Niš Clinical Centre. ‘I am deeply honoured to receive this award. It will certainly be an encouragement to continue with my work. Also, I would like to draw attention to the true heroes of this story – the medica staff and those infected with the coronavirus, a disease that has become a symbol, if not the symbol, of this year. Their efforts and selfless sacrifice point to the values that are almost forgotten in our daily lives, as well as to the fact that we must never give up,’ Ana Paunković emphasized.

Jovana Uhrin walked away with a Golden Nika statue again this year, for a fantastic film about the fight against Covid-19, broadcast on Kurir Television. ‘I would just like to point out that the people deserving of this and any other award are those who our stories are about, whose work we tried to represent as faithfully as possible, and present to the viewers what they were going through as they took care of the health of each and every one of us. We as journalists are the least important here, packaging everything and presenting it to the viewers. That’s why I cannot be seen in any frame of the film – because we are not the ones leaving our families to spend days in hazmat suits, listening attentively for every ‘beep’ from the people we have never seen before, and who are our closest of kin now. We do our jobs professionally and responsibly, and journalism means courage,’ Jovana Uhrin, the winner of last year’s Interfer Grand Prix, pointed out.

She thanked the Ministry of Health for their support. ‘I don’t know if we were the first to come up with the idea to make this kind of film, but I do know that we made it in record short time and were the first to broadcast it. I’m glad that we inspired other reporters to make similar films and reports,’ Jovana added. 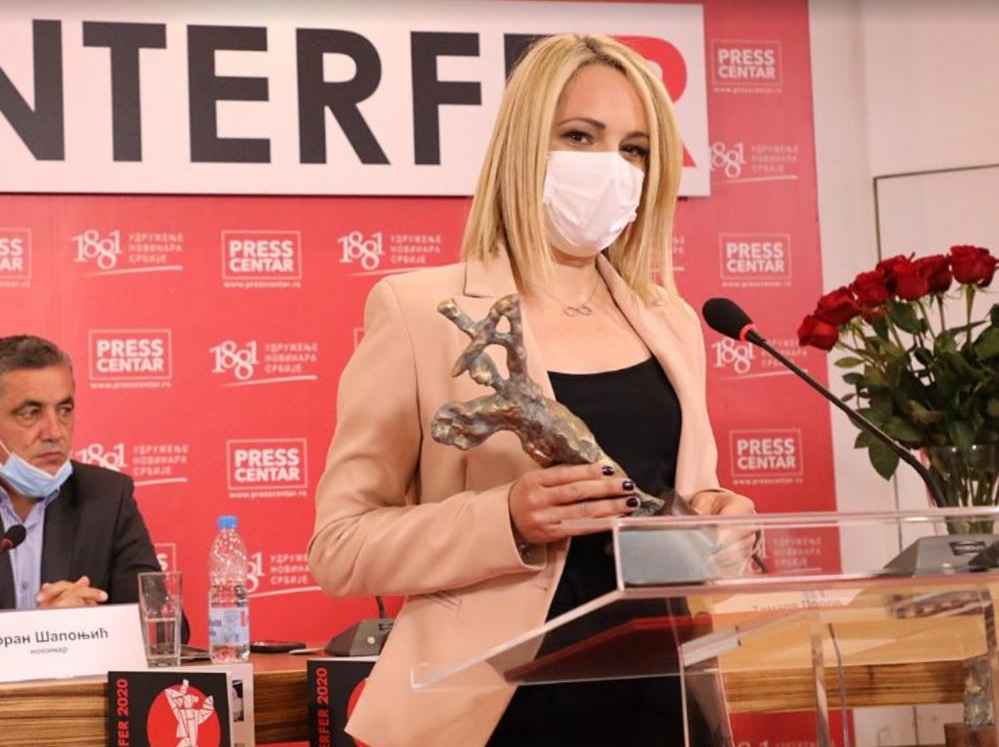 Nemanja Stanković said that ‘The Land of the Living’ is one of those stories that show right from the start of filming that it is worthwhile to fight for the reportage as a form. ‘Because, when I stood before my interlocutors, who had come to the church as their last resort, to find a cure for addiction, it really took a lot of courage to listen to and report on their stories. In addition to the answers to the basic journalistic questions, the reportage also provides the toughest answers, as when I ask the heroes of my stories: “How are you?” and “Can you?”. What follows is art – reporting on those stories in an authentic way,’ Nemanja Stanković said, adding:

‘I think this is the fourth time that I’ve held in my hands an Interfer reportage award, and that goes to show that this form of journalism must be loved, that in order for one to be made, journalism goes beyond the bounds of the craft.’ 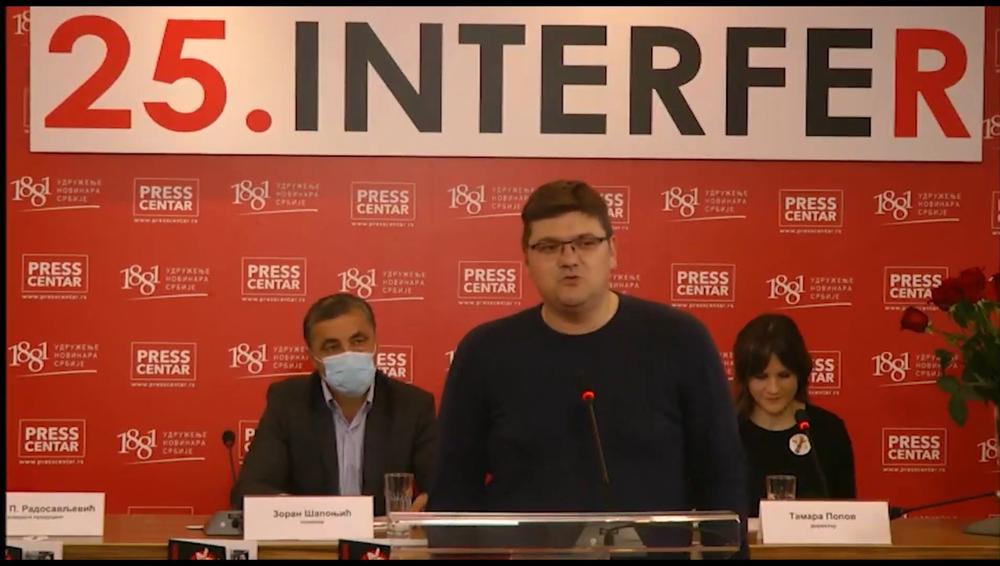