Adria Media Group, leader on the media market in the region has launching news desk of the future.
DAILY NEWSPAPER WITH THE LARGEST CIRCULATION  IN SERBIA 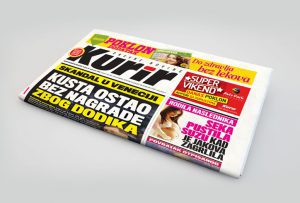 In October 2016, the brand KURIR carried out the most advanced vertical and horizontal integration. The result was the production of content improved to perfection, significantly contributed

The main strength of Kurir is its people who are dedicated professionals, trained and developed in conjunction with the brand, thanks to which Kurir stands shoulder to shoulder with the world’s well-known media.
Kurir is known for objective reporting, provocative headlines and proven exclusives, but before all by the belief that the audience and its needs are the most important. For this reason,
in addition to useful and interesting information, Kurir regularly provides to its readers i.e. visitors some benefits that can make their life easier. Special attention is paid to the clientsand its specifics.
Kurir participates actively in the promotion of important social issues, and the best example is the current campaign Stop Violence, which was launched in order to draw public attention
to one of the most pressing problems in society. 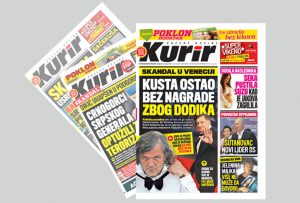 Rate card for daily newspaper Kurir can be downloaded HERE. 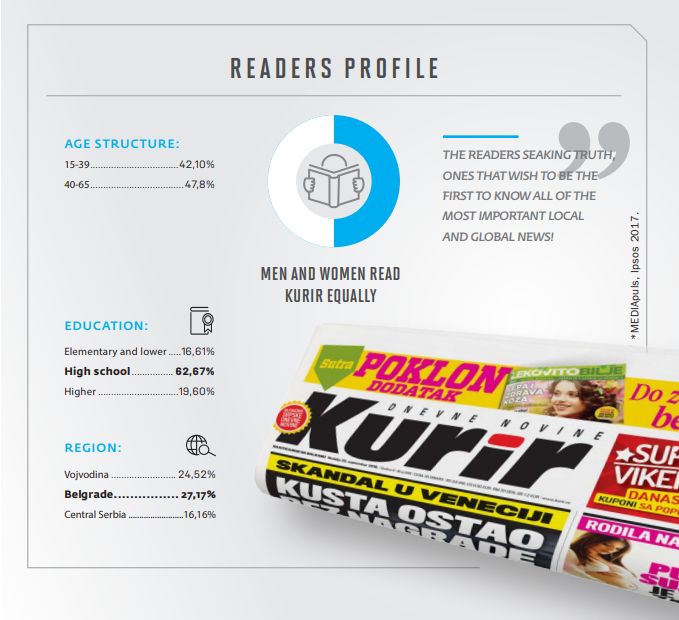 GLOSSY
(every Wednesday)
At the beginning of November 2017 we dared to make a revolutionary step on the Serbian print media market: we have launched the celebrity magazine that we give as a gift with the daily Kurir on Wednesdays. It is the first time in Serbia that readers have a chance to get for free a celebrity magazine in 32 pages prepared by the team of top professionals. The circulation of the Kurir with the first issue of Glossy was sold out in record time.

LENA
(every Sunday)
After a fantastic success of Glossy magazine, Kurir has launched another gift magazine whose content competes with the best lifestyle and health magazines around.
Lena is a new family magazine which will become your ultimate guide to lifestyle, health, nutrition, fashion, house design, along with interviews, advices and interesting stories from Serbia and all over the world.

FINANCIAL TIMES
(every Mondays)
Financial Times brings a selection of news and analysis on the global economy from one of the world’s leading media.

Kurir.rs is one of the most visited sites in Serbia. According the latest data from Google analytics Kurir.rs has more than 10.000.000 unique visitors per month. That is growth of 17,8% in last 12 months.

More about kurir.rs portal can be found HERE.