On the occasion of one hundred days to 31st Summer Olympic Games, site Kurir.rs has launched an Olympic sport Viber Chat called “ Kurir sport via Rio 2016”. Launching which was held on the spectacular Olympic carnival. This public Viber Chat will be fully devoted to sport and the Olympic theme. 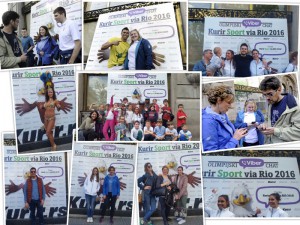 After great success of Kurir Viber public Chat which is currently the most popular public chat in Serbia when it comes to the media with more than 47.000 followers, our website has launched another public chat, but this time it is dedicated to sports news and the upcoming Olympic Games.

At the Olympic carnival organized by the Serbian Olympic Committee on Tuesday, April 27th, which was spread across the streets of Belgrade on the occasion of one hundred days to 31st Summer Olympic Games it was presented the Olympic Viber Chat called “Kurir sport via Rio 2016”.

During the unforgettable two hours all visitors of the carnival was informed about the new Chat by Viber girls in Kurir sport corner which was set up at the station “Beijing”.

In Kurir sports corner the visitors took pictures with “Srećko”- the official mascot of the Olympic Team of Serbia, also with our athletes who go to the Olympics.

The huge hug of our “Srećko” could not resist even passionate Brazilians so they also take pictures with him and with our colleagues.

Stay with us an be a part of Olympic Viber Chat and follow KURIR SPORT VIA RIO 2016.