Newsweek magazine will no longer be read in Serbia. This is a direct consequence of the persecution of Adria Media Group at the hands of the incumbent President of the Republic, Aleksandar Vučić. 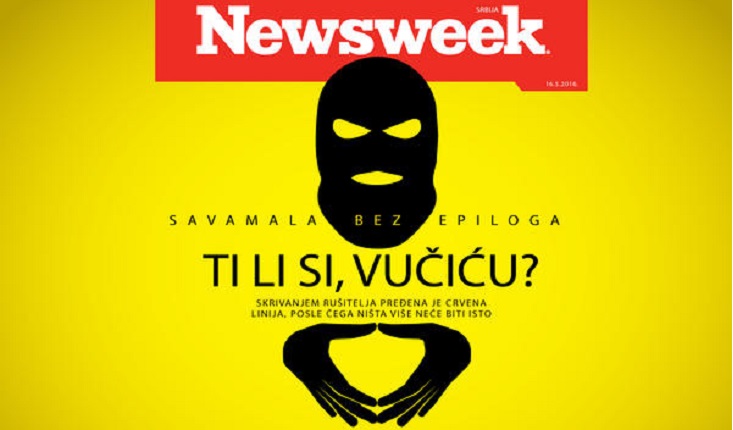 It is not the first time that Vučić shuts down a media outlet. He has now added Newsweek to the list of his victims.

By acquiring a licence to publish one of the most influential world news magazines,  we wanted to show that Serbia could also be a part of the network of the most credible international magazines.

Adria Media Group holds the licence for publishing this renowned magazine until the end of 2019, however, due to the witch-hunt mounted by the government and abuse of all institutions, this influential magazine is set to perish from the Serbian media market.

Our journalists, who have won to date many international awards, will no longer be able to participate in all the projects launched as part of the European Investigative Collaboration (EIC) featuring the most credible European news magazines.

In the year of its forced demise, Newsweek Serbia has been nominated for a prestigious award in the field of data journalism – Data Journalism Awards 2017.

Many articles by the most eminent authors, exclusive interviews and investigative stories have been a source of pride for Adria Media Group.

The public in Serbia has been witnessing for the past two and a half months to the annihilation of a media company carried out by the government with Aleksandar Vučić at its helm over Adria Media Group’s efforts to merely inform the citizens of Serbia about the detrimental impact of his rule and the abuse of power.

Such an abuse of the institutions as well as influence peddling by Serbian President Aleksandar Vučić and his bunch of cronies, among whom the most vocal is Interior Minister Nebojša Stefanović, have assumed terrifying proportions.

Two-month-long blocking of all of our company’s bank accounts, which was imposed despite lacking legal grounds for such an action whatsoever, without any explanation and without specifying the amount of non-existent debt or a deadline by which the accounts would remain blocked, has taken its toll. In an effort to fight back, we have brought criminal charges against Dragana Marković, the head of Tax Administration, as well as Ivana Draganjac, the head of Tax Administration’s Stari Grad branch.

Adria Media Group has also been put under seemingly subtle financial pressure reflected in cancellation of advertising deals by state-run companies and many other advertisers controlled by the state or those close to Aleksandar Vučić’s regime.

In addition to the criminal charges brought against those responsible at the Tax Administration, Adria Media Group legal team has also filed a criminal charge against Nebojša Stefanović, who made it unambiguously clear in his public statements that he was personally behind the orchestrated witch-hunt targeting our company.

Due to all types of pressure applied against us which is alien to a democratic world and on account of persecution to which our employees have been subjected on a daily basis, we, regrettably, must inform the Serbian citizens that the hold-to-ransom project of the man blatantly abusing power – has succeeded.

The intent of Aleksandar Vučić is to introduce a total media blackout in Serbia, and every day his repressive measures are bringing him closer to this goal.

We are making every effort to withstand pressure to which we have been subjected, fully aware that the dictatorial iron fist is eager to quash all other Adria Media Group’s publications as part of its endeavour to wipe out anyone daring to publish the truth.